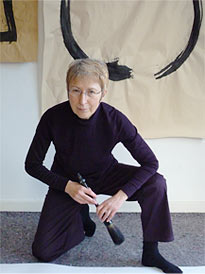 Ursula Werner has been studying with a master of calligraphy in Kyoto since 1997. They communicate by post (using interpreters) or non-verbally. And yet, despite these complications, she will soon be accredited as a master of SHO, the traditional art of writing.

During my visit Ursula Werner showed me two examples of her calligraphy which have travelled to Japan and back again. Here highly complex characters, executed in black ink, are arranged in two vertical columns. In places spiralling red lines are superimposed or added to a character like a shadow. She explains that “The red shadow shows me the correct form, and the spiral here indicates that everything is ok. The more spirals there are, the better”.

Then she shows me the process involved in writing. Before my very eyes these mysterious and wonderfully beautiful characters come into existence, first in the right-hand column and then in the left, from above to below. First her brush is dipped in the ink and she takes a brief look at what she will copy. Sometimes she writes slowly and firmly, and then quickly and lightly. Her brush is moved in straight lines or in curves, always in movement which also continues when the brush is raised from the paper so as to begin elsewhere.

Every detail is essential in bringing about harmony and balance in calligraphy, even the empty spaces between lines and characters. An excess or lack of bodily tension is revealed in the finished work, but not to my untrained eyes. However a Master can see from the written characters whether this process was accompanied by appropriate body dynamics.

I simply don’t know how Ursula derives the order and the way in which these complicated characters are written from what she is copying. She explains to me that there are a number of basic rules for the development of characters, and in addition that the end of a line or the beginning of the next provides information about the way the brush passes between them.

In China writing developed alongside the articulation of language. That was not the case in Japan where there was originally no script. Around 500-600 A.D. the Chinese system of writing was taken over by way of trade contacts and cultural relations. The Japanese that had been spoken since time immemorial then had to be combined with this imported way of writing, which involved a highly complicated procedure.

Only now has Ursula Werner learnt some Japanese - what she calls “Pigeon Japanese”. However she has studied and practiced how to write these complex characters with great precision for many years. Japanese and Chinese Masters emphasise that knowledge of the language might be helpful but is not necessary in learning calligraphy, an art highly esteemed in Asia. In Europe too these aesthetic and elegant works of art are much appreciated.